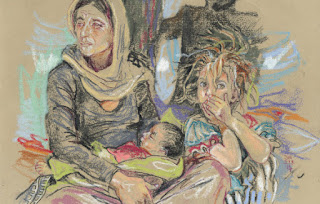 On august 3, 2014, ISIS attacked Yazidis in Sinjar. They killed thousands of men, abducted boys to make them child soldiers, and women and girls for sex slavery.

More than 3,000 women and girls are still missing.

Five years ago, Daesh made an attempt at annihilating religious minorities in Syria and Iraq. One of its largest attacks began on August 3, 2014. On that day, Daesh launched a violent attack against Yazidis in Sinjar. Daesh fighters killed hundreds, if not thousands of men. As part of the same campaign, Daesh fighters abducted boys to turn them into child soldiers and women and girls for sex slavery. More than 3,000 women and girls are still missing and their fate is unknown. A few days after the attack on Sinjar, Daesh also attacked the Ninevah Plains and forced over 120,000 people to flee for their lives in the middle of the night. Daesh committed murder, enslavement, deportation and forcible transfer of population, imprisonment, torture, abduction of women and children, exploitation, abuse, rape, sexual violence and forced marriage. The atrocities committed by Daesh are recognized as crimes against humanity, war crimes and even genocide, the crime of crimes.

Despite having occupied significant territories in Syria and Iraq, five years later, both Syria and Iraq announced that Daesh was defeated and the territories were successfully liberated (thanks to the assistance provided by the Global Coalition against Daesh). However, it is critical to recognize that, despite the fact that we are talking about Daesh being “defeated”, the word does not mean what it should mean. There are still hotspots of Daesh support both in Syria and Iraq. Also, the territorial defeat of Daesh does not mean the defeat of Daesh’s perverted ideology. This continues to poison many minds. Despite the territorial defeat, the danger to the targeted communities continues as they are battered by the consequences of the genocidal atrocities.

And these consequences are grim. The number of those killed by Daesh is still not known. Mass graves continue to be discovered. Lessons learned from other historic mass atrocities suggest that mass graves will continue to be discovered for decades to come. This is the harsh reality for the families of those who disappeared. They face decades of waiting, hoping, praying.

The destruction of the region caused by Daesh is significant. Substantial efforts are necessary to rebuild houses and infrastructure. Some of the work is being carried out by humanitarian organizations, some by states, including the US, Hungary and Poland, who are at the forefront of providing the assistance directly to the affected communities.

August 3, 2019, marks the fifth anniversary of the Daesh’ attack on Sinjar, Iraq. Five years have passed and it is crystal clear that the response to the atrocities perpetrated by Daesh has not been adequate and this contributed to the threat the targeted religious minorities still face. On the fifth anniversary of the genocidal atrocities, it is crucial to scrutinize what needs to be done to address the aftermath of the Daesh atrocities. In order to do so, over the next weeks, I will be exploring the five-point action plan presented by Nadia Murad, a survivor of Daesh genocide and Nobel Peace Prize laureate. She advocates the principals of assistance, reconstruction, justice, security and protection. Nadia Murad presented her action plan at the recent Ministerial to Advance Religious Freedom organized by the U.S. State Department. Voices like hers, voices of the people who have been affected but the atrocities, have to be heard and followed up on.

Indeed, if we want to make a difference to the lives of those targeted by Daesh, we need to give them a voice and then listen to them. Arriving at the table with preconceptions on how the response should look like will not help. The survivors of these atrocities, the people living in the region, know what they need to rebuild their communities, to survive and hopefully to flourish. The survivors need to be put first.