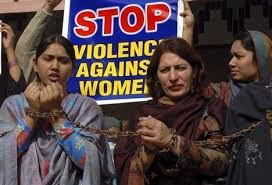 Pakistani society is predominantly patriarchal. Men and women are conceptually divided into two separate worlds. Home is defined as a woman’s legitimate ideological and physical space, while a man dominates the world outside the home. The false ideological demarcation between public and private, inside and outside worlds is maintained through the notion of honor and institution of purdah (vail) in Pakistan. Since the notion of male honor and izzat (honor) is linked with women’s sexual behavior, their sexuality is considered a potential threat to the honor of the family. Therefore; women’s mobility is strictly restricted and controlled through the system of purdah, sex segregation, and violence against them.In the given social context, Pakistani women lack social value and status because of negation of their roles as producers and providers in all social roles. The preference for sons due to their productive role dictates the allocation of household resources in their favor. Male members of the family are given better food, education and are equipped with skills to compete for resources in the public arena, while female members are imparted domestic skills to be good mothers and wives. Lack of skills, limited opportunities in the job market, and social and cultural restrictions limit women’s chances to compete for resources in the public arena. This situation has led to the social and economic dependency of women that becomes the basis for male power over women in all social relationships.However, the spread of patriarchy is not even, the nature and degree of women’s oppression/ subordination vary across classes, regions, and the rural/urban divide. Patriarchal structures are relatively stronger in the rural and tribal setting where local customs establish male authority and power over women’s lives. Women are exchanged, sold, and bought in marriages. They are given limited opportunities to create choices for themselves in order to change the realities of their lives. Women in rural areas are leading miserable lives. They don’t have right to be educated by their parents and their forefathers. Even they could not peer out of their houses without having any accompany of their elders like brother, father any other male from their home covered and wrapped from head to toe, under a long heavy cloth from head to feet, like a shuttle coke covering all the body even the face and eyes of a woman are cannot be seen from outside. This hijab have to wear by the woman no matter if the temperature is 550 as it comes in summers.The most powerful aspect of social and cultural context is the internalization of patriarchal norms by men and women. In learning to be a woman in the society, women internalize the patriarchal ideology and play an instrumental role in transferring and recreating the gender ideology through the process of socialization of their children. This aspect of women’s lives has been largely ignored by the development initiatives in the country. Official statistics rate the overall literacy to 46% whereas only 22% for girls. There are 163’000 primary schools in Pakistan, of which merely 40’000 cater to girls. Female’s primary education has a very poor standing in the country. It was assumed that the reasons behind low female school enrolments were cultural. However, research pointed to the social vulnerability of women, as parents’ most crucial concern. Poverty is also a main obstacle hindering women from education. Over 18% of Pakistani children are working and supporting their families.Children’s working as housemaid is a common social practice in Pakistan and this sector employs more girls than boys. such Children belong to low income families, lower casts and minorities become the victim of sexual brutality, exploitation and human trafficking. Daily newspapers are full every day for such kind of news but never any action taken by authorities because these low cast and minority children are taken less concerned subjects by authorities. If some females work in office, factories even in any fields she has to do work at home after her business hours. Such type of attitudes is big hindrance in the empowerment of women, families and development of our society. Males never admit women as respectable part of the society, while the respect and acceptance of every human being play a vital role in promotion of peace culture and sustained development.