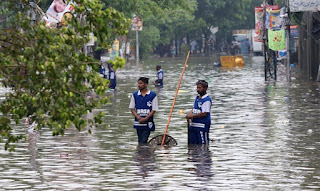 Although discrimination against sanitary workers has already been highlighted, it is multi-faceted beyond the appropriation of sanitary work for non-Muslims in public service bodies. There is growing evidence around, and resentment against the deep-rooted institutional discrimination which manifests itself across a broad range of excess workload, exposure to occupational health hazards, safety risks and fatalities of sanitary workers.

According to a study titled Management of Municipal solid waste generation in Pakistan, 2015, there are 1 to 1.5 sanitary workers per 1,000 population in major towns. However, experts are of the opinion that the effective ratio of sanitary workers to population is far worse. Karachi city, with a population of 20 million is covered by 11,000 solid waste workers. Caste Consciousness in Pakistan – a research conducted by Sara Singha — shows that the Lahore Waste Management Company (LWMC) employed 7,894 sweepers in 2015 — a majority of them Christians. The same study cites the Capital Development Authority (CDA) employing 1,500 sweepers for Islamabad – all of them Christians. Based on the population of these areas, it is easy to conclude that a sanitary worker serves at least 2,000 citizens.

It is pertinent to note that the discrimination faced by non-Muslim sanitary workers in the sector, is not only through the regulation of their work or accompanying social stigmatisation. Rather, several bad practices including political appointments, poor urban planning, departmental corruption and non-implementation of labour laws; come together to reinforce the marginalisation of non-Muslim participation in the sanitary sector.

These workers are employed by municipal bodies, Water and Sewerage Boards and Public Health Engineering Department. These are all public service bodies, providing service delivery on cleanliness and maintenance of public infrastructure. Owing to a variety of reasons, these organisations have, over the years, sought to engage sanitary workers through contracts, renewed every 11 months to avoid any obligation to regularise their services. In other cases, private commercial contractors supply sanitary workers and deduct commission from their wages, which are already below the minimum wage-rate.

Over the last two years, there have been several protest demonstrations by non-Muslim workers in Sindh and the Punjab, alongside expressions of discontent at public forums about the culture of political appointments. A regular employee is entitled to BPS-1. A contractual employee receives Rs 12,000-Rs 14,000 a month. Political appointments make use of both these systems; inducting constituents of political parties in municipal bodies. Though worker interviews showed that political appointments may include Christian workers, it is mostly Muslims who receive such favours. Once appointed, most of the Muslim workers refuse to work arguing that, dust and dirt interferes with their prayers. This forces the concerned department to move them elsewhere. Eventually, they end up working as gardeners, drivers or errands persons at the houses of local officials, while continuing to draw a salary from the municipality.

The reason ghost workers elicit resentment from ‘working’ employees in the municipal sanitary sector is because working employees have to do, they were supposed to do cover greater areas for cleaning, put in more hours and most importantly – clear extra blocked manholes. “On average, I clean 20 sewerage drains a month, because of shortage of staff in Hyderabad. If the Muslim ghost workers show up for work, I would still be doing the same work, but it could come down to two manholes a month,” says Yusuf Gill employed with the Water and Sanitation Agency (WASA) for 35 years.

The national narrative of Pakistan as a Muslim majority country, categorises non-Muslims as ‘minority’ Pakistanis’. “We noted this in our training sessions with sanitary workers,” says Shireen Aslam, a social mobiliser and member of District Human Rights Committee. “Muslim workers would categorically say: “hum Pakistani hain, yeh gutter saaf karna humara kaam nahi. Yeh log ghair mulki hain, inn ka kaam hai.” (We are Pakistanis, it is not our job to clean sewers. Non-Muslims are non-locals. It is their job).

“On average, I clean 20 sewerage drains a month, because of shortage of staff in Hyderabad. If the Muslim ghost workers show up for work, I would still be doing the same work, but it could come down to two manholes a month” – Yusuf Gill, WASA employee.

Another inevitable outcome which reinforces the inherent discrimination is corruption in urban planning.

Builders and developers encroach upon public space including pedestrian ways, while building regulators take no action. “In Hyderabad, encroachment is so pervasive that residents take street manholes inside the house. With lanes becoming narrower, it is difficult to bring large-sized machinery to clear blocked sewage. As a result, we are forced by our supervisors to manually clean the sewer, adding to our occupational-health and safety-risk burden,” says Yusuf Gill.

The same observation was made by Zulfiqar Shah from the Pakistan Institute of Labour Education and Research who led a fact finding mission to Umarkot in 2017, following the death of a sanitary worker, Irfan Masih. Masih had fainted while clearing a blocked sewer and was refused treatment by the doctors, who asked his relatives to clean his body before they could treat him. In the end he died leading to strong protests by the sanitary workers’ community in the district. Talking about their findings, Shah says: “We visited the site of the incident where the sanitary worker had collapsed in the manhole and found that a long queue of shops had been constructed over the drain. This manhole was almost inside a shop. Moreover, one of our crucial findings was that there were over 200 people appointed to sanitary workers’ positions for Umarkot city. A large number of them were known as ‘white collar’, deputed either by influential people, or those just collecting regular salaries. The Municipal committee chairman admitted on record that some of the people appointed against sanitary workers’ positions were not willing to do the job of cleaning and have been assigned other duties. The entire cleaning work is done by around 90 Christian sanitary workers, mainly from Gujrati and Marwari communities who are locally referred to as ‘bhungi’. The chairman said no person from other castes is willing to do the cleaning work so that only Christians and ‘bhungis’ are doing it. He blamed his predecessors for appointing the wrong people.”

The health risk associated with sanitary work is well documented. Several studies point to various illnesses resulting from continuous exposure to dust particles. These include short-term illnesses such as sneezing, coughing, eye irritation, lung tissue swelling, asthma and throat infections. A 2013 study also finds long and continuous inhalation of non-industrial dust in Pakistani street sweepers as one of the critical factors in the development of chronic obstructive pulmonary disease, resulting in obstructive ventilatory patterns.

There is also a feeling that ghost employment reinforces unemployment and inequality. This is well explained by Imran Masih Gill, from the Hyderabad Municipal Corporation: “Political appointees get paid out of municipality’s budget for serving local officials and influential persons who enjoy their labour for free. There are so many unemployed people in our community. They cannot get jobs in the sanitary sector because Muslims who do not serve the sector, are taking their jobs.”

In terms of resistance against these issues, sanitary workers are represented by Sanitary Sector Workers’ Union covering municipal workers, in major metropolitans and municipal bodies. Opinions about the effectiveness of these unions. However, workers generally feel they have inadequate capacity and resources to launch a concentrated struggle against institutional discrimination. Zahid Sahotra, a local representative from the Christian community who mobilised Christian sanitary workers in Jahanian said they could not go beyond a single day of protest against ghost employment. “The workers are terrified of local political leaders from ruling parties, who can use their influence to have them expelled from service. I had to give-up on mobilisation, as workers refused to lead the protest owing to the pressure from the municipality.”

Justice (retd) Majida Razvi, who has formed a special task force for sanitary workers in the Sindh Human Rights Commission, says complaints sent by the sanitary workers to the Commission to resolve their issues are grave in nature and clearly point to an in-built bias in the system. “The system is therefore excruciatingly slow to respond when these issues are taken up,” she observes. “One of the initial complaints from this sector came from a Christian sanitary worker from the Hyderabad Development Authority (HDA) where he had served for two decades. He had been working as a complaint clerk even though his official appointment and hence salary remained that of the junior position of jamadar (sweeper). He complained of a delayed response to his repeated applications for promotion. According to him, he was verbally informed that people from the minority community cannot be appointed as complaint clerk. We sent repeated notices and reminders to the HDA managing director for a good six months before he was officially promoted to his rightful position.”

“There are no two opinions about the marginalisation of the sanitary workers and the need for an urgent set of actions to address discrimination which is so deep rooted that it continues without ever being questioned,” continues Justice Razvi.

“However, in order to address this, the everyday lives and challenges of these workers need to be understood, as their work is riddled with far greater risks than that of any other sector. Forcing them to dive in the sewer or insulting them through use of separate utensils or denying them their due opportunity in employment promotion or adding to their work load with ghost employment is a reflection of the system’s denial of fundamental human rights to citizens, workers and especially to minorities. It needs a forceful and consistent response from the state as well as the civil society. We have been assured by the Sindh Government of their commitment to address this issue raised by the commission. We hope they will deliver on their promise. ”