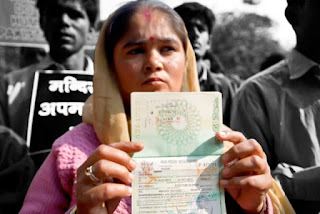 The Hindu community of Pakistan has demanded that the Indian government should issue visas to them so that they can participate in the funeral rituals of their deceased family members in India.Amid other funeral rituals, Hindus consider the custom of scattering the cremated remains (ashes) of the dead in the Ganges River extremely important.Traditionally, family members carry the ashes to Haridwar – an ancient city and important Hindu pilgrimage site in North India’s Uttarakhand state, where the River Ganges exits the Himalayan foothills.The majority of Hindus living in Pakistan bury the dead instead of cremation. However, Hindus belonging to higher castes cremate their loved ones and then take their ashes to India to perform the last rituals at the Ganges.Due to the recent Pak-India tensions, India has tightened its visa policy which has made it difficult for Pakistani Hindus to go to India for the funeral of their loved ones. Sources say that visa applications of many families have been rejected several times and returned with various objections.Speaking to The Express Tribune, former Hindu parliamentarian Dewan Chand Chawla said that as per the Hindu belief, the ashes of cremated bodies must be scattered in holy waters.The Ganges is personified in Hinduism as a goddess and followers believe that if a person’s ashes are scattered in it, that their next life will be improved.“The mortal soul will not attain peace until the ashes of the deceased are washed away.All sins of the deceased are washed away when the remains are scattered in the Ganges,” he said. “Haridwar is the holiest place for Hindus where deities were born.”He said that at present, ashes of thousands of dead people are kept in different temples across Sindh, including Karachi, waiting to be taken to India.“On the one hand, the Indian government claims to be a great democracy, while on the other hand, they are denying Pakistani Hindus their religious rights by not issuing visas,” he said.Akin to Chawla, former Hindu parliamentarian Kanji Ram, who hails from Rahim Yar Khan district of Punjab, lamented that a large number of Hindus residing in Pakistan have to bury their loved ones against their religious practices.However, in certain cities of Sindh, Khyber Pakhtunkhwa and Punjab, there are Hindus who cremate the deceased.“The Indian Embassy in Pakistan should provide visas to such families on humanitarian grounds and sympathy,” Kanji Ram said.According to official statistics, there are currently over five million registered Hindus living in Pakistan but various Hindu organisations believe that the actual number is more than nine million.Of the total, 80% of Hindus belong to the Dalit and other scheduled castes. Almost all people belonging to the lower castes bury their dead instead of cremating them.In southern or lower Sindh, the majority of Hindus are settled in Hyderabad, Bhanbhur and Mirpur Khas divisions while in Punjab, most of them live in Rahim Yar Khan, Bahawalpur, Liaqatpur and Ahmadpur Sharqia. In these areas, Hindus either have a common cemetery or a separate graveyard for each caste.Kanji Ram said that the exact count of cremations or burials of the deceased is unknown, adding that on average, cremation costs Rs20,000 to Rs25,000 depending on the conditions and a funeral pyre takes about 500–600 kilogrammes of wood to completely burn a body.  That apart, the travel and visa to take the ashes to Haridwar incurs additional costs, which is impossible for most Hindus in Pakistan to bear because of their low socio-economic status.“Even though it is preferable to take the ashes to scatter it in the Ganga, the ritual can be performed over any other body of water, such as a flowing river, canal or the sea,” Kanji Ram added.“However, Pakistani Hindus hope that the Indian government will deal with the matter seriously and will issue visas to families so that they can take the ashes of their loved ones to Haridwar.”The Indian embassy says that it “actively facilitates visa applications of all Pakistani applicants including members of the Hindu community who want to travel to Haridwar to perform last rites of their family members.”The advisory further add: “High Commission already issues visas to relatives who want to travel to India for performing the last rites of their relatives. The applicants wanting to travel to India for the last rites of their relatives are required to submit the death certificate of the person whose ashes are to be immersed, in addition to the applicant’s copy of NADRA card, copy of electricity or gas bill and a polio certificate.”Published in The Express Tribune, January 29th, 2020.