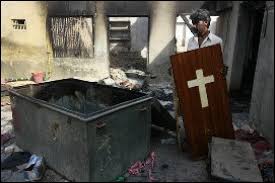 A church in Birmingham has been targeted by heartless thugs who smashed CCTV and tore down a cross. This was just in the latest in a string of attacks on the city church. The congregation who attend the Hope Family Church in Billesley is being ‘driven away’ following the number of break-ins and criminal damage. The West Midlands Police are investigating two of the incidents which took place in February, but a spokeswoman for the force said the attacks were not being treated as hate crimes.

One of the incidents occurred late on Saturday, February the 15th. The thugs used an old set of step ladders at the back of the church to gain access to the roof and smash down a cross. Only 3 days later on Tuesday the 18th of February 18 the church was again vandalised people broke in, decided to throw chairs as well as going on the rampage which involved slashing a projector screen. Previous attacks involved the church being covered in graffiti and on other occasions smashing CCTV cameras and hurling bricks at the building.

Neil Foster who is the worship leader at Hope Family Church told Birmingham Live: “The church has been here for 30 years. It’s only an old prefab building but this is breaking our hearts. The building has been graffitied, we’ve had bricks thrown at the church and in the latest break-in the projector was pulled down and slashed. They have smashed CCTV cameras, daubed paint outside and even used step ladders to reach the roof and pull down the cross. We have a really dedicated congregation but even they are being put off coming as they are concerned about what might happen to their cars being left outside”.

Police have urged anyone with information on the most recent attacks to contact them. A Freedom of Information request that was submitted to West Midlands Police last year revealed there had been a total of 439 crimes carried out at places of worship in 2019. In addition to this from 2015 through too 2019 there were 2,315 crimes carried out at places of worship across the West Midlands. Of these offences 1,481 occurred at churches