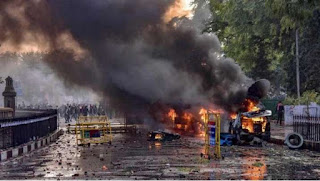 Soon after the notification about the presence of possible terrorists was issued, the Gautam Budh Nagar Police have constituted 42 teams at all 21 police stations, wherein each team would comprise of 8 to 10 police personnel.

Amid the ongoing protests over the amended Citizenship Act in Delhi, authorities have warned of the possibilities of terrorists entering the national capital. According to a notification by the Intelligence Bureau, a terrorist cell may be activated in Delhi. Security agencies have also warned of massive protests in Delhi in the wake off Citizenship Amendment Act and the possible presence of unsocial elements. According to the notification, militants from SIMI and its offshoot Indian Mujahideen (IM) can be a part of the demonstrations.

Soon after the notification was issued, the Gautam Budh Nagar Police have constituted 42 teams at all 21 police stations, wherein each team would comprise of 8 to 10 police personnel.

The local intelligence unit is also investigating the notification issued by the authorities. Meanwhile, the police have advised the citizens to report to the nearby police station in case they spot a suspect.

The Delhi Police have also written to social media platforms like Facebook and Twitter to remove objectionable content from nearly 60 accounts, an officer said on Thursday, asserting that the force is working to quell rumours on the Citizenship Amendment Act (CAA).

Police have appealed to people to report accounts that circulate such rumours, he said.

“We have been keeping an eye on social media handles for the last three-four days and have been flagging content that is objectionable or can incite tension,” he said.

The police have written to the platforms to remove this content and also deactivate these 60 accounts, the officer said.

He said apart from the police, there are other agencies that are keeping an eye on the platforms.