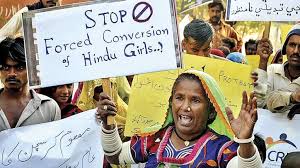 Pakistan judges maintained that if the girl, who was abducted, converted and forcefully married off to a muslim man, has already had her first ‘menstrual cycle’, then she would be considered an adult under the Islamic Shariah Law, making her marriage legal and justified.

The case of a 14-year-old Pakistani Catholic girl, who was allegedly abducted from her residence in Karachi, converted to Islam and married off to a Muslim man, has been in the Pakistani courts for some time.

While her parents have not been able to see their daughter since October 14 — the day when she got kidnapped — the two-member bench hearing the case seems to have come out with a different view about how to prove that the girl is an adult and not a minor.

Hearing the case on February 3, Justice Muhammad Iqbal Kalhoro and Justice Irshad Ali Shah observed that the marriage between the alleged abductor and the Catholic girl would be considered valid and legit under the Islamic Shariah Law.

The judges maintained that if the girl has already had her first ‘menstrual cycle’, then she would be considered an adult under the Islamic Shariah Law, making her marriage with her abductor legal and justified.

The statements of the two judges left the parents of Huma in a state of shock.

“We were in a state of shock when the judges did not consider our evidence and referred to Sharia Law to justify the marriage”, father of the girl said.

“We were expecting to see our daughter at the court hearing. We haven’t been able to see her since her abduction on October 14. We also hoped that the court would deliver justice and hand us the custody of our daughter,” the father added.

Parents maintain that they have already provided documentary evidence including a Catholic baptismal certificate and testimony from her school purporting to show she is 14-year-old.

The remarks from the judges left the girl’s family heartbroken and hopeless of getting any justice from the Pakistani courts.

The parents have been fighting for the return of their daughter after they filed a case in the Sindh High Court (SHC) seeking annulment of the marriage under the Child Marriage Restraint Act.

The court heard the case on February 3 and has adjourned the case till March 3, giving more time for the authorities to determine the age of the girl.