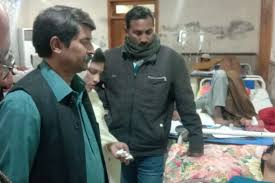 Two Christian men in Pakistan who were working on the construction of a church are recovering after being shot by locals opposing the church building.

According to religious freedom charity CLAAS-UK, the men were attacked by local Muslims in a village in Sahiwal, Punjab.

The charity said Gulzar Masih, who has legal ownership of land in a small village, had plans to build a church for local Christians so they didn’t have to travel far to attend church..

It’s been reported a local Muslim opposed both the church construction and the ownership of that land and wanted the grab the land forcefully stop a church form being built.

After an altercation on 2nd February in relation to the church, Masih, his son and the attacker were arrested and released on bail.

Later that day the same attacker and several other people equipped with firearms demolished the boundary wall of the church.

CLAAS-UK said when Masih rushed to stop the wall being destroyed, the Muslim attackers opened fire. Masih, his son, and another person were shot, while someone else was attacked with an axe.  The charity said several suspects have been arrested, but the attackers have also filed police complaints about the Christians. The suspects claim the Christian men attacked them too