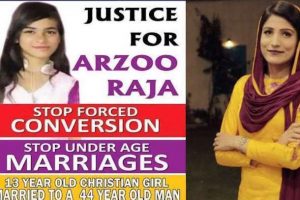 Arzoo Raja was was kidnapped on Oct. 13 while playing outside her home.

An online petition has been set up by a Pakistani Catholic rights organization asking for public support to protect religious minorities from forced conversion.

An online petition has been set up by a Pakistani Catholic rights organization asking for public support to protect religious minorities from forced conversion.

The resolution, submitted by the Center for Social Justice (CSJ) on Dec. 1, is titled “An Appeal Addressed to the Prime Minister of Pakistan” and it will be presented to the government during an online conference on Dec. 8 titled “Protection of Minorities from Forced Conversion.”

In its resolution, the CSJ called for a broad-based, concerted and urgent response to protect religious minorities from recurring violations of rights, particularly the forced conversions of minority women.

“Knowing well that religious minorities have also borne the brunt of extremism in addition to social discrimination, social and economic marginalization makes them vulnerable to human rights violations routinely. Therefore, the underlying issue of human rights violation in the name of religion needs a serious response from all stakeholders,” it said.

“In the absence of an adequate institutional response, the involuntary, unethical and manipulated conversions and marriages pose a serious threat to religious freedom, respect for human rights, and relations between majority and minority faith communities. Therefore, administrative and policy interventions on an urgent basis are necessary to protect the rights of religious minorities, particularly of minority women and children.”

The endorsers of this petition, belonging to diverse religious, ethnic and gender identities, strongly urge the government of Pakistan to adopt effective measures to curb the criminality involved under the pretext of conversions including the following recommendations:

— The Federal Ministry of Human Rights should carry out a comprehensive study and analysis of the issue, including under-trial cases, and the remedies, if any, provided by the concerned departments and institutions.

— The Parliamentary Committee established in November 2019 should only make statements based on factual inquiries and comprehensive data analysis and disclose the progress made by the committee on the issue.

— Police all over the country must investigate all pending cases and future cases under Section 498 B of the penal code, prohibiting forced marriage. Whoever coerces or in any manner whatsoever compels a woman to enter into marriage shall be punished with imprisonment of either description for a term, which may extend to seven years or for a term which shall not be less than three years and shall also be liable to fine of 500,000 rupees.

— An amendment bill in the Criminal Procedure Code should be introduced that makes all religious conversions be acknowledged, verified and validated by a senior civil judge to ascertain the presence of a free will, consent, in addition to the appropriateness of age and marital status of the parties.

— The Majority Act be amended to bring it into conformity with the NADRA Act and other laws on the majority.

— An autonomous, empowered and statutory National Commission for Minorities Rights be constituted without further delay.

— The chief justice is respectfully urged to consider sensitization of the judiciary and judicial officers on the issue of forced conversions and the above-mentioned recommendations.

According to a recently published CSJ study (2013-20), the highest rate of alleged forced conversions (52 percent) was reported in Punjab, with 44 percent in Sindh.

The resolution comes against the backdrop of the Arzoo Raja case which led to days of nationwide protests from the country’s Christian minority.

Arzoo, 13, was allegedly abducted, converted to Islam and married to a 44-year-old Muslim man in Karachi. She was eventually rescued and sent to a government shelter on the order of a high court in Karachi.