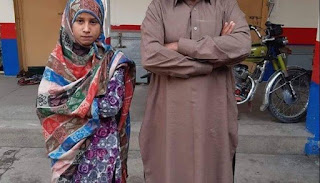 Dargai Levies have arrested an accused and Nikah Khwan for allegedly forcibly marrying an orphan girl in Malakand.

Malakand Levies Investigation Officer Mukhtashim Khan said 45-year-old accused Subhanuddin forcibly married 13-year-old Nadia on February 14. The accused was arrested from Warter area on Wednesday, while the girl was handed over to her grandmother.

Mukhtashim Khan told TNN that the accused belongs to Chakdarra ara of Dir and he is already married and has four children. He said Nadia”s father was a cancer patient who died few days ago. He said Nadia”s father had taken loan from Subhanuddin for his cancer treatment which the poor family could not repay. He said Subhanuddin married Nadia forcibly as ‘compensation” to settle the debt.

The investigation officer said the Levies personnel have also arrested Nikha Khwan Muhammad Rehman and two witnesses to Nikah, Zahir Shah and Masood. The accused have been sent to jail. If the guilt is proven, the accused can face seven years in jail.

Imran Takkar, head of Group Development Organization, an institution working for human rights, said while talking to TNN that uncontrolled increase in population is causing several economic problems for poor families. He said it is seen commonly that poor families have many children and parents remain unable to fulfill basic needs of their children.

Imran Takkar said such families focus more on look after of boys than girls and most girls are married off in a very young age to ‘get rid of them”. He said poor parents often ignore the very wide gap between the ages of the girl and the man she gets married to.

The rights activist said a law about early marriages is still enforced in Pakistan since 1929 which provides for one-month jail and Rs1,000 fine on people involved in such practice. He lamented that early marriages are common due to weak laws in this regrd and ugly practices of Swara and Wani are also continuing in some areas where young girls are married off to settle disputes with rival parties.

Mr Takkar said a law was drafted about early marriages in Khyber Pakhtunkhwa in 2012 whcih suggested three-year imprisonment for parents and Nikah Khwan involved in such practice, but that could not be presented in the provincial assembly so far. He said increase in literacy rate can bring awareness among people about the damages of this cruel practice.