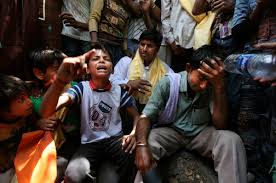 A newspaper advertisement in Bannu, Khyber Pukhtunkhwa (KP) recently called for applications for the khakroab position. This is the official term for a sweeper, a member of the janitorial staff. Historically, because of institutional racism and religious persecution, this role has been almost exclusively reserved for Hindus, and especially Christians. The advertisement, in the column labeled “religion”, listed Hindu, Balmiki (a sect of Hinduism), Christian and Shia.

The ensuing rage on Twitter and other social media platforms was immediate. The resulting apology was swift, and predictably spun to feign sincerity and innocence. But even then, they only apologised for using the word “Shia”. Congratulations Shias, you have been upgraded to first class citizens.

There are so many thing wrong with this picture, that it is difficult to determine a starting point.

First, how did this advertisement ever get past the approval process? Second, how did the newspaper itself not object to such open discrimination, not just against Hindus and Christians, but also the fact that it tacitly labels Shias as non-Muslims? Third, and perhaps most importantly, why was there even a need to drag religion into a job posting? The answer to all three is simple. We have come to accept that such positions will only be applied for (and subsequently granted to) Christians and Hindus, as it is beneath our collective, imagined station. And this was no accident; it was deliberate, because it is considered common practice.

This is the state of affairs in contemporary Pakistan. A provincial government that touts itself on inclusion and tolerance, and wants to set the new standard for both politics and governance in Pakistan, allows this to fly under its nose. Even when the apology is issued, it completely ignores Christians and Hindus, because honestly, who cares, right?

During the coverage of the Pakistan Super League (PSL) recently, a comedian on television said the following verbatim to showcase his patriotism: ‘I am ready to do anything for Pakistan, I will even become a choora’. A choora is a derogatory term for a Christian khakroab, and this statement elicited thundering applause from the studio audience. What a great man, he is willing to sink all the way to the level of a choora to save Pakistan! No one questioned the logical inconsistency. No one questioned the deep-seated racism and hatred for minorities. No one questioned the comedian on this exceptionally insolent and crass claim.

The racism continued in various forms on the program. A short while later, the comedian asked a former cricketer, a question about Chris Gayle. He asked whether Gayle feels disgusted when he looks at his own black hands. Surely it must cause nausea when he is eating. Tactfully, the guest stayed quiet on the issue, and the show moved on as if nothing had happened. The comedian, however, looks quite pleased with himself, for he had cleverly snuck in both religious discrimination and racism into the affair, and no one had been the wiser.

All of this is normal, but it should not be. All of this is accepted, but it should not be. Within our so-called liberal bubbles, we feel secure that we clamoured over social media. But the dirty secret of social media is that most of what is said on social media is not seen by most people. It is not sufficient to just tweet a picture of the newspaper. As citizens, we need to hold our leaders more accountable. Make calls to their office, write letters to their secretaries, send emails with demands for a better apology, and a promise to refrain from tinting a job posting in religious racism ever again.

Discrimination against minorities seems to be the true national sport of Pakistan. In our textbooks, in our daily social upbringing, we are lead to believe that non-Muslims are lesser beings, second-class citizens meant for janitorial jobs, indifferent attitudes, and universal disdain. This institutional racism has crept into every crevice, every pore, and every corner of the Pakistani society. It is our responsibility, as conscientious citizens to keep to in check, to challenge it, and to demand a better environment for everyone as equal citizens, as afforded by Article 25 of the Constitution of Pakistan.

The author serves as a Senior Research Fellow at the Center for Research and Security Studies, Islamabad, is a freelance journalist, and holds a bachelor and master degree in strategic communications from Ithaca College, NY, USA. He can be reached at zeeshan.salahuddin@gmail.com and tweets @zeesalahuddin