Afghanistan resumes anti-Taliban offensive after attacks in Kabul and Nangarhar. 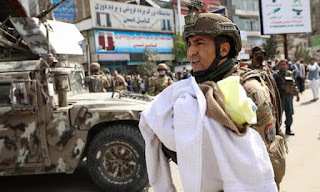 Gunmen attacked a hospital that houses a maternity clinic in Kabul on Tuesday, killing at least 16 people including two newborn babies, and a suicide bomber killed at least 24 others at a funeral on a morning of double tragedy for Afghanistan.

In the capital, soldiers raced out of the hospital carrying infants wrapped in bloodstained blankets to waiting ambulances, after the attackers rampaged their way through the wards.

The Afghan president, Ashraf Ghani, in response ordered a resumption of a full offensive against the Taliban and other militant groups, ending a period of reduced military activity ahead of US-brokered peace talks that had been expected to start this year.

The attack targeting the most vulnerable of civilians, including children just hours old and exhausted new mothers, caused a wave of horror and revulsion.

“These newborns, among the first voices they heard, on the first day of their lives, was the sound of gunfire … and among their first experiences, being targeted in a war they and their mothers had no part in,” Shaharzad Akbar, the chair of the Afghanistan Independent Human Rights commission, tweeted. “Will their lives, like ours, continue to be shaped by war?”

In an address to the nation in the early evening, Ghani laid out an abrupt shift in response to the bloodshed from the “active defence” position adopted by Kabul in recent months, as the US tried to broker peace talks with the Taliban and authorities pushed for a ceasefire to allow medics to tackle an escalating coronavirus crisis.

“The Taliban have not given up fighting and killing Afghans, instead they have increased their attacks on our countrymen and public places,” Ghani said.

Negotiations between Afghans were meant to begin after a US-Taliban deal this year paved the way for the withdrawal of American troops. But even initial talks about talks were foundering because of disputes about prisoner release plans and intensifying Taliban violence in rural areas. Now hopes for progress towards ending a nearly two-decade long civil war look even dimmer.

“The reason to pursue peace is to end this senseless violence. This is not peace, nor its beginnings,” Ghani’s national security adviser, Hamdullah Mobib, said on Twitter.

“If the Taliban cannot control the violence, or their sponsors have now subcontracted their terror to other entities, which was one of our primary concerns from the beginning, then there seems little point in continuing to engage Taliban in ‘peace talks’.”

The Taliban said they were not responsible for either attack, but have not condemned the bloodshed at the Kabul hospital.

Mike Pompeo, the US secretary of state, called the twin assaults “appalling”, adding: “The Taliban and the Afghan government should cooperate to bring the perpetrators to justice.

“As long as there is no sustained reduction in violence and insufficient progress towards a negotiated political settlement, Afghanistan will remain vulnerable to terrorism.”

The morning’s assault began with an explosion at the entrance to the 100-bed hospital in Dasht-e-Barchi, in the west of the capital, at about 10am local time. Three gunmen then burst inside and began shooting, apparently indiscriminately.

“They started firing as soon as they reached the doorstep,” one weeping doctor told Afghanistan’s Tolo television, soon after escaping. “Four mothers were killed in the room, two were in a safe room and survived. It was a devastating scene.”

A reporter who was able to access the hospital soon after the attack said gunmen appeared to have opened fire in every room, and on everyone inside, with some bodies still lying in the recovery room where women are taken after giving birth.

Husbands, brothers and fathers, who are not normally allowed on maternity wards in Afghanistan, thronged nearby streets in desperation, begging for news about whether their relatives had survived.

“Sixteen women and children were martyred and 16 other civilians were wounded in today’s barbaric terrorist attack,” said Feroz Bashiri, the director of government media and information centre.

Afghan women sit in an ambulance after being rescued by security forces during the hospital attack. Photograph: Mohammad Ismail/Reuter

Médicins Sans Frontières (MSF) confirmed it ran the maternity section of the hospital. “Explosions and gunfire were reported. Efforts are still ongoing to evacuate patients and staff,” the international charity tweeted. Hours earlier it shared a picture of a baby, safely delivered by emergency caesarean section at the clinic.

The dead included mothers, nurses and infants, the interior ministry said, and officials shared a photo of two young children lying dead inside the hospital. About 100 people were rescued from the building, including three foreigners.

The attack in Nangarhar province, eastern Afghanistan, targeted the funeral of a police commander who had died in the night of a heart attack, said Niloofar Aziz, a member of the provincial council.

The explosion at about 11am killed one member of the council, Lala Khan. His father and brothers were among at least 68 injured. The scale of the casualties meant the death toll could rise, officials warned.

“Because it was a funeral of a high-profile man, many civilians were gathered there from other districts of Nangarhar. Among the people attending were MPs and members of the council,” Aziz said.

The bomb devastated family groups who were mourning together. “Three of my nephews and one of my brothers were martyred,” one witness told state television. “He was standing on my left, his name was Ismael. There was a rain of dead bodies.”

There was no immediate claim of responsibility from any other group. The neighbourhood to which the hospital belongs is home to a large community of Hazaras, a minority who are mostly Shia Muslims, and have frequently been targeted by Islamic State, including at a gym and a school.

In March the regional Isis group also claimed responsibility for an attack on a Sikh temple in Kabul that killed dozens from the tiny religious minority group, including women and children.

Later on Tuesday there was further violence in the eastern province of Khost, when a bomb planted in a cart in a market killed a child and wounded 10 other people.