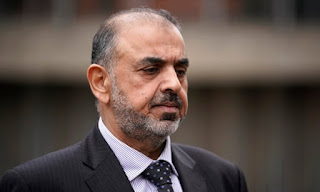 Lord Ahmed, 61, was charged this month with two counts of attempted rape and one count of indecent assault in the early 1970s.

He entered no pleas during the 10-minute hearing but his solicitor, Haroon Shah, said he would be pleading not guilty to all the charges.

Ahmed appeared at Sheffield magistrates court charged under his full name, along with two of his brothers.

The charges against Ahmed relate to two complainants – a boy and a girl – and to alleged incidents between 1971 and 1974, when he was a teenager. The indecent assault charge relates to a boy under 14.

Ahmed stood in the dock with his brothers, wearing a dark suit and navy tie. He spoke to confirm his name, date of birth, address and his nationality as British.

Farouq and Tariq entered not guilty pleas during Tuesday’s hearing.

All three men were granted bail to appear at Sheffield crown court on 16 April.

Ahmed was born in Pakistan-governed Kashmir but his political roots are in Rotherham, where he grew up and still lives. Educated locally, he joined the Labour party at 18 and served for a decade on Rotherham metropolitan borough council.

After studying at Sheffield Hallam University, he ran a chain of shops in his home town and became a property developer. He was made a life peer in 1998 by Tony Blair. He resigned from the Labour party in 2013.