Two kebab shop owners – Mohammad Abdul Basit (left) and Amjad Bhatti (right) – who infected nearly 150 customers after their meals were contaminated with human faeces have been ordered to pay £28,000 in compensation

Basit, 48, and Bhatti, 45, yesterday pleaded guilty to seven offences of failing to comply with European provisions for food safety and hygiene.

They were handed four-month jail sentences, suspended for 12 months, and were ordered to pay costs of £25,000 at Nottingham Crown Court. Each victim will also receive £200 compensation.

Judge Jeremy Lea, sentencing, said: ‘This was a very serious and significant outbreak of food poisoning, caused by you in the way that you ran your business, as food business operators, and caused by your breaches of food safety and health regulations.

‘Between June 18 and June 26 last year a large number of those who went to Khyber Pass, either to eat or take food away, were made ill as a result of food that they had been given.

‘Some of whom were made so ill and unwell they had to go to hospital. One, a 13-year-old girl, was made so unwell, notwithstanding the treatment she had in hospital, she may have died. 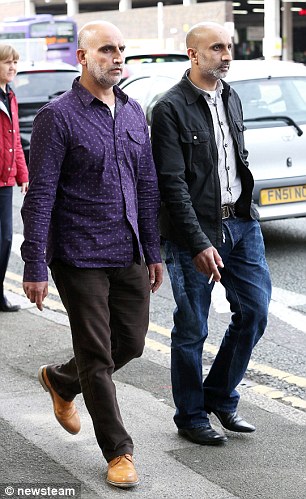 Basit (left), 48, and Bhatti, 45, yesterday pleaded guilty to seven offences of failing to comply with European provisions for food safety and hygiene

‘One or two individuals [had] never felt so ill. They thought they were going to die. This affected people not only for weeks, but in many cases for months.’

The rare strain of E.coli was only the second outbreak of its kind in Europe and was last seen in Italy during the Second World War.

Mr Lea added that a significant amount of infected matter was needed to cause so much severe illness in those who ate at the takeaway.

He said: ‘What was going wrong here was the poor hand washing with soap and clean water to reduce the risk of contamination.

‘If you make money by supplying cooked food, you owe members of the public a real duty to ensure people will not be made unwell by your disregard of food safety and hygiene and regulations.’

The court heard the 13-year-old victim was rushed to Nottingham’s Queen’s Medical Centre, where she was diagnosed with gastroenteritis and treated in intensive care.

Another victim, father-of-one Bartosz Wesolowski, 31, ate a chicken kebab from the Kyber Pass and was told by a nurse he ‘could have died’.

Inspectors also found there was inadequate hand washing and surfaces of microwaves were contaminated heavily with food debris.

Bernard Thorogood, prosecuting, said: ‘The standards of hygiene there in June 2014 were low.’

Robert Egbuna, defending, said Basit and Bhatti, both from Derby, admitted their responsibilities.

He added lessons had been learnt and improvements made at the takeaway.

Paul Dales, from Nottingham City Council’s food, health and safety team, speaking after the case, described the outbreak as ‘significant’.

He said: ‘This was a significant and serious food poisoning outbreak affecting a large number of people, some of whom developed severe symptoms.

‘It’s fortunate there were no fatalities, as this is a strain of E.coli rarely found in the developed world, this being only the second confirmed outbreak in Europe.

‘It’s clear that hand-washing practices by some workers were wholly inadequate and this led to food becoming contaminated.’