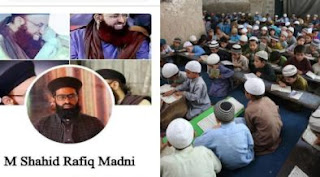 “Islamic Scholar Qari Shahid Madani, President of TEHREEK LABAYAK Narowal is arrested for raping a 13-year-old boy in house of Allah.TEHREEK is responsible for 100s of blasphemy cases including Asia Bibi case ; killings of innocent people for saving Islam“

On 16th September, after Isha prayers, the cleric forced himself on the boy. “He did not let the teenage boy leave the seminary for three days,” the report suggested. The boy’s father has urged the police to arrest the cleric and hold him accountable for his deeds.

Many such cases of child sexual abuse in religious institutions have been reported in Pakistan in recent times. In May 2020, a 15-year-old boy was raped at a mosque in Gujrat city of Punjab province. In December 2019, a cleric Qari Shamsuddin and four others were arrested for abusing a young boy in a madrassa. He was raped over 100 times. In another case, in December 2019, the father of a child registered a case against a local shrine’s cleric for abusing his child. In Peshawar, a cleric was accused of abusing a child in a madrassa. In October 2019, a cleric named Mukhtar Ahmad was arrested for molesting children. The atrocities against Hindus in Pakistan are well documented including many cases of abduction, rape and forced conversion of minor Hindu girls.