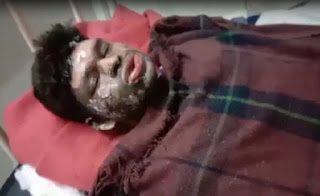 One youth from Dalit community was set to fire by pouring kerosene on him on Tuesday in Madhya Pradesh. The youth named Dhaniram Ahirwar suffered 60% burn in the attack by around 15-20 men, and is currently undergoing treatment at Hamidia Hospital in Bhopal.

The incident happened on January 14 in Dharmashree area under Motinagar police station in Sagar in Madhya Pradesh. According to reports, after a dispute over some issues, a group of people including Chuttu, Azzu Pathan, Kallu and Irfan assaulted Dhaniram and his family members, After that, they surrounded him, poured kerosene on him and set him to fire. It is alleged that around 15 to 20 persons from the Muslim community were involved in this crime.

The accused persons were harassing Dhaniram for last several months. He had even lodged a complaint with the Motinagar police station in Sagar against them, saying that his life is under threat, but police took no action to protect him.

A fight had taken place two days before the incident between the two sides, but it is alleged that the police didn’t take any action even after that.

Dhaniram Ahirwar was taken to Bundelkhand Medical College after the incident, from where he was referred to Bhopal after two days. The police have registered a case under sections 294, 323, 452, 307 of the IPC and also under the SC/ST Act against Chuttu, Azzu Pathan, Kallu and Irfan. Three of them have been arrested by police in the case, while the fourth is absconding.

Madhya Pradesh BJP has alleged that more people were involved in the case but police not taking any action against them due to political reasons. Madhya Pradesh BJP chief Rakesh Singh said that out of 15 to 20 people who had attacked the Dalit man, only 2-3 have been arrested. He said that only formalities have been done in such a shocking incident because Congress is playing the politics of vote bank and appeasement.

Rakesh Singh said that before the attack, Dhaniram had lodged a complaint against the accused persons, pleading the police to protect him from them, but police took no action. He said that Dhaniram had gone to the police station at least 3 times. The BJP leader said that had the police taken action on the complaint, this incident would not have happened.

On Saturday leader of the opposition Gopal Bhargava went to the hospital in Bhopal to meet the victim. He said that five days ago people from minority community burnt Dalit Dhaniram alive. He alleged that police are working to shield people from a particular community on the pressure of the government.

Sagar MLA Shailendra Jain said that despite a fight between the two sides two days, police took no action, and this resulted in the incident. He added that the accused are fearless and there is no law and order in the state.