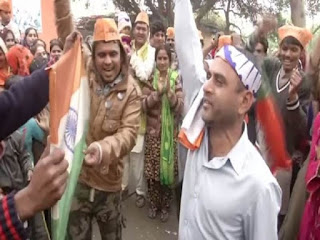 With Citizenship (Amendment) Bill being passed in the upper house of Parliament on Wednesday, the Pakistani Hindu refugees staying at the Majnu ka Tilla were overjoyed and excited at the prospects of getting Indian citizenship after the Bill becomes an act with the consent of President Kovind.

Large number of immigrants hailed the Central government for passage of the bill and thanked Prime Minister Narendra Modi for the same.

Amid sloganeering of ‘Bharat Mata ki Jai’, the residents distributed sweets among each other to celebrate the occasion.

“We are really happy with this decision. It is like we have taken a new birth here. We are extremely grateful to Modi for the decision,” said another refugee.

A woman refugee stated that the kindness shown by Modi will not be forgotten.

“We want other Pakistani Hindu citizens to also come to India to celebrate this occasion,” said another woman.

The CAB smoothly sailed through Parliament after the Rajya Sabha passed it on Wednesday. As many as 125 members of the Upper House voted in favor while 105 MPs voted against the Bill, which Lok Sabha passed earlier this week.

The Bill seeks to grant Indian citizenship to refugees from Hindu, Christian, Sikh, Buddhist and Zoroastrian communities fleeing religious persecution from Pakistan, Afghanistan, and Bangladesh and who entered India on or before December 31, 2014.