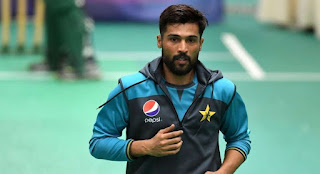 Pakistan left-arm pacer Mohammad Amir is planning to obtain a British passport in a bid to permanently settle down in England in future.

According to details, Amir married a British citizen Nargis Malik in September, 2016 and has already applied for a “spouse visa”, which allows him to stay in England for 30 months.

In the case of obtaining a “spouse visa”, the 27-year-old will be able to work and take advantage of various other perks that comes along with it.

Left-arm pacer is also looking to purchase a house in London.

It is not yet clear whether Amir has already obtained the “spouse visa” or not, as he has previously spent jail time in the United Kingdom for his role in the spot-fixing scandal.

However, Amir has since then travelled to England numerous times with the Pakistan team and for county cricket.

After getting permanent residency, the pacer will also be able to apply for a British passport.

Amir on Friday announced his retirement from Test cricket with immediate effect, but reaffirmed his commitment to playing white ball cricket for Pakistan.

Amir’s teammates in the Pakistan team have been aware of the fact that the pacer is not interested in playing for the Men in Green anymore and wants to play T20 leagues in England and around the world.

However, Amir didn’t inform any of his teammates about his intention to retire from Test cricket immediately after the World Cup.

Pakistan is likely to play their next Test series against Sri Lanka in the United Arab Emirates (UAE). According to sources, Amir was aware that the pitches in the UAE will not support fast-bowlers, hence he decided to walk away from Test cricket before the series.